Getting to Know Southeast Asian Cuisines: Dishes to Note

The Southeast Asian region, nestled between cultural giants China and India, is a melting pot of these major civilizations’ cultures. Nevertheless, each country combines these Chinese and Indian influences with their homegrown traditions. This is evident, for instance, in their renditions of dishes like curries and noodles.

If there is anything common between these countries’ cuisines, it’s probably the use of coconut and its by-products. Coconut trees are highly abundant in their tropical soils. Apart from that, they prefer to cook with clay pots for savory and clear soups. They also purchase quality wok pans for sauteed dishes beautifully glistening with oil. But reading about the following dishes of each country will make you realize the region is more than the sum of its thousands of islands.

Nasi Goreng, which translates to fried rice, is considered the national dish of the 17,000-island country. Malaysia also calls their fried rice Nasi Goreng but is made with different ingredients. The Indonesian fried rice’s seasoning composed of their signature kecap manis or sweet soy sauce and other spices is to credit for its appetizing orange-brown color. The dish is made more special by topping it with a fried egg whose edges are fried to a crispy golden brown perfection, which adds to the pleasing mouthfeel in every bite.

Nasi lemak is another rice dish but is distinct for its creamy consistency made possible by adding fresh coconut milk. To complement the mildly sweet coconut milk flavor are the leafy and spicy notes of Malaysian screwpine and sambal, a chili sauce. Popular sides to this dish include fried anchovies, thin cucumber slices, and toasted peanuts.

Vietnam is known for its huge bowls of pho, but just as scrumptious is its other noodle dish called cao lau. Unlike pho, cao lau is served with only a small amount of broth and a generous serving of leafy greens, bean sprouts, and thin slices of barbecue pork. The rice noodles in Cao Lau is also prepared uniquely by dipping them in a lye solution, which gives it a springy bounce and a yellow tinge.

Amok is a sweet curry dish that is either mixed with fish, chicken, or pork. Its flavor base is a blend of lemongrass, kaffir lime leaves, garlic, galangal, and turmeric. The meat and vegetables are sliced into bite-size pieces and set aside until just before the seasoning pastes are sauteed all together and later adding coconut milk into the wok. The dish is usually served in a banana leaf dish and garnished with kaffir lime and bell pepper.

Although the dish has crossed over to Malaysian territories Sabah and Labuan, ambuyat originated from Brunei. It is made of tapioca or sago starch mixture, which is boiled into a sticky consistency. This gooey dish’s charm lies in its non-overpowering taste, which makes it compatible with various dips containing shrimp paste, lime, chili peppers, garlic, and durian sauce.

Mohinga is Myanmar’s take on rice noodles and is typically eaten as a breakfast. What’s unique about this dish is its use of the spongy tissue lining the stems of banana trees, which gives the eater surprise crunches as he finds comfort in the fish and shallot-infused broth. Those who feel adventurous could squeeze in some lime juice and sprinkle chili flakes onto the broth to elevate its savoriness.

Thailand is home to many types of stir-fried dishes, the most popular of which is pad thai. It’s incorporated with oil, rice, noodles, and bean sprouts. A complimentary sauce is added, made of garlic, chilies, vinegar, fish sauce, tamarind paste, and palm sugar are protein-rich chicken, egg, and shrimp. The finished product is then topped off with crushed peanuts and cilantro before it is served.

Adobo is one of the lasting culinary legacies of Spanish colonization in the Philippines. It originates from the word adobar, which means marinate.

Adobo is typically made by allowing chicken or pork to sit in a mixture of soy sauce, vinegar, sugar, peppercorns, dried bay leaves, and garlic for 30 minutes. The combination and the remaining marinade mixture are then brought to a long simmer until the meat becomes impressively tender. The resulting sweet yet sour dish is best with freshly cooked rice.

East Timor prides itself on its Ikan Pepes or steamed fish. Aside from its melt-in-mouth quality, what makes the fish all the more glorious is its seasoning consisting of a blend of chilies, galangal, shallots, ginger, turmeric powder, lemongrass, coriander, bay, and kaffir lime leaves. These are all brought to a simmer in a pan to become a fragrant, flavorful, and rich brown paste.

The paste is rubbed all over the raw fish then wrapped in oven-sterilized banana leaves to lock in its flavors while retaining the fish’s softness even after a 30-minute bake. 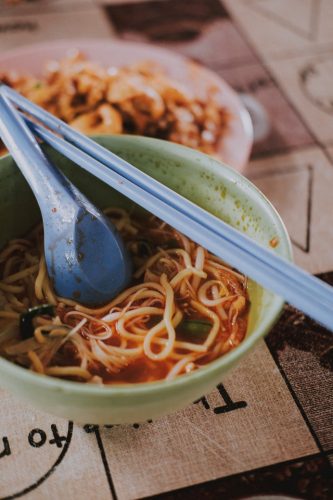 Just like more popular Asian dishes, Southeast Asian food deserves international attention. The moment you try any one of these dishes, the more you will find their culture endearing for its richness and diversity.