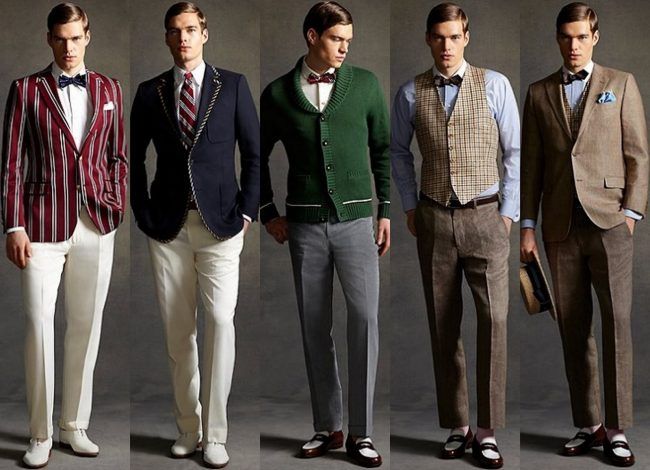 Society is gradually becoming more open to men’s fashion. With the men’s apparel market segment reaching $483 billion worldwide, it’s no wonder that retailers are looking back and reimagining styles from the previous decades.

Among the most iconic and influential fashion decades is the 1920s. It was a time of significant social change following the First World War. Men were no longer confined to traditional roles and embraced a more modern way of life. Along with this came a new sense of style reflected in the clothing men wore.

The 1920s menswear continues to play a significant role in today’s fashion trends. It’s a timeless style seen on the runways of major fashion houses and worn by celebrities. But what makes this style so popular, and how can you achieve it? Here are some key distinctions of the roaring twenties fashion:

The 20s were a time of newfound freedom and social liberalization for men. Clothing began to reflect this with looser fits and softer fabrics. Gone were the days of stiff, formal attire. This newfound freedom paved the way for more personalized and unique style choices.

Formal wear is still an essential part of the roaring 20s style. But it became more diverse, colorful, and glitzy. While functionality is still a key factor, style took the center stage during this decade. Men began experimenting with different looks, and fashion became more about self-expression.

Accessories That Make a Statement

The 1920s men’s fashion was all about making a statement with your clothes. Accessories played a big role in achieving this. Everything from suspenders to fedoras was on the streets. Men would often use these items to express their individuality and stand out from the crowd.

A notorious street gang from Birmingham, England, the Peaky Blinders were known for their unique style. That includes three-piece suits and flat caps. While the gang’s activities were far from legal, their style has definitely impacted men’s fashion.

With the rise of sportswear and leisure clothes, the roaring 20s opened new doors for a more casual style. It was a welcome change for many men who were tired of the rigidity of formal wear. While casualwear wasn’t considered appropriate for all occasions, it became more acceptable to sport this style daily.

The 1920s gave much of today’s fashion its start. While the style has evolved over the years, many key elements remain the same. Here are some must-have clothing pieces men wore in the 1920s:

Suits have always been a staple in men’s fashion. But in the 1920s, it reached new levels of popularity. Three-piece suits became all the rage. This style includes suit jackets, trousers, and vests (waistcoats) made from the same material.

The 1920s were a golden era for neckwear. Bow ties and knit ties were all the rage. It was when men started experimenting with different patterns and materials. Silk was a popular choice for many, but other fabrics like wool and cotton were also used. Today’s bow tie is a direct descendant of the ones worn in the 1920s.

Dress shirts also replaced the standard undershirt, thanks to a new style of jacket that didn’t cover the waistline. It comes in many different colors and patterns. The most common choices were white, blue, and striped.

Button-down collars were also introduced during this time. This new style kept the tie in place and gave a more polished look.

Trousers also underwent a few changes in the 1920s. The most notable difference is the high-rise style. This new look was achieved by wearing the trousers higher on the natural waist area. This style elongated the legs and created a slimming effect.

Pleats and cuffs were also commonly seen on baggy trousers during this time. Pleats added more volume to the casual pants, while cuffs gave a more polished look.

1920s blazers and flannels were a more casual style of clothing. This look was often seen in younger men and students. The blazer is a suit jacket that is typically made from wool flannel. It has metal buttons and patch pockets.

All-black shoes were the standard before the 1920s. It evokes a more serious and formal look. But in the 1920s, two-tone shoes became popular. This new style helped to add a bit of personality and flair to an outfit.

Two-tone shoes are usually available with one dark color and one light color. The most common pairing is black and white. But brown and white, blue and white, and even red and white combinations were available.

Many of the same accessories worn today were also popular in the 1920s. But there are a few key pieces that help to complete the look.

It was a must-have accessory for any well-dressed man in the 1920s. These watches were a symbol of upper-class status and sophistication. They were also a practical way to keep track of time.

Although belts were also popular during this time, suspenders were the preferred choice for many men. They kept trousers in place and gave a more polished look.

Hats were also a common sight in the 1920s. The most popular hat styles were the fedora hat, bowler hat, and newsboys. Hats protected against the sun and inclement weather. They also gave outfits a more polished look.

A famous statement of wealth and status, canes were a must-have for any well-dressed man in the 1920s. These walking sticks came in a variety of styles and materials. The most popular choices were wood, metal, or ivory.

With all of these different choices, it’s easy to create a 1920s-inspired look that is unique. Choose a few pieces and mix and match them to create your style. To give an idea of how to pull off the 1920s look, here are some ideas.

Neutral tones are always in style but adding a pop of lighter colors is a great way to put a spin on the look. Try a subtle print or pattern for a more modern take on suiting. Add a pair of two-tone shoes and a hat to complete the outfit. A pocket device is also a nice touch.

If you’re looking for a more vintage-inspired look, go for a classic black-and-white combination. A striped shirt with suspenders and high-rise trousers is a great way to achieve this look. Add a fedora and a watch for an extra touch of sophistication.

The preppy style was also popular in the 1920s. Pair a button-down shirt with high-rise trousers for a modern take on this look. Add a blazer and a pair of two-tone shoes. A newsboy hat is also a great way to complete the preppy look.

Many of the same athletic references in today’s fashion industry were also popular in the 1920s. Try layering a sweater vest over a button-down shirt. Add a pair of high-rise trousers and shoes. A newsboy hat or a beanie is also an excellent addition.

Although your chosen hairstyle is up to you, a classic 1920s-inspired look is made perfect with slicked-back hair. You can achieve this look using pomade or oil to slick the hair back. But a simple comb-over will also do the trick if you’re not a fan of the greasy look.

Today’s 1920s-inspired looks would not be complete without the right accessories. Choose a few pieces to add the finishing touches to your outfit. You can also modernize the look by choosing more contemporary additions such as sunglasses or a modern watch.

Many trends from the 1920s have come back in recent years, now called the modern 1920s men’s fashion. And as this period continues to pass on generations, it will surely be an inspiration for years.

There are several ways to incorporate 1920s fashion into your wardrobe today. The above are only some examples. With creativity, you can easily create a modern 1920s look that is unique to you. So, embrace your inner dandy and start experimenting with your style today.